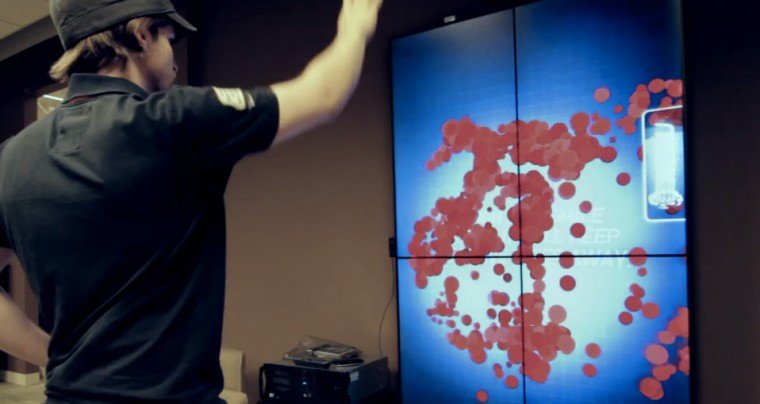 A seven-foot motion-activated interactive wall we developed for Bally Total Fitness. This project went on to win bronze in the Arts, Entertainment & Recreation category at the Digital Signage Expo.

This project took over 7 months from concept the completion with a relatively small team. The creative team consisted of three designers, one flash developer (myself), a motion graphics artists named Sean Wehrli, and a 3d camera integration company called Helios Interactive. As well as support from the account team and UX department.

It is best described on the Manifest blog as follows:
[quote]The wall includes four separate applications – an unprecedented variety of functions for a device of its size and complexity. The most simple is the Bally Logo Break, which helps users learn how to control the screen by shattering the familiar red Bally logo into many smaller pieces, then moving them around to reveal fitness and nutrition tips. The Nutrition Wall application helps users gain knowledge that will help them inside the gym and out. The Workout Counselor enables gym members make the most out of their experience, providing exercise recommendations to target specific muscle groups. Finally, the Future Self application is a sort of “funhouse mirror” that shows users what they might look like if they keep at their workout routines.[/quote]

For more details check out these interviews:
Part 1:
Designing a New Experience

Part 2:
From Edison to Xbox

Part 3:
The Wave of the Future

Chosen by Intel to be part of an exhibit of six new technologies at the World Retail Congress, taking place September 25 – 28 in Berlin.
[quote]They see this as one of the best examples of a real-world deployment of cutting edge technology, and they would like to use it as part of a showcase” – Mike Schaiman (Helios Interactive)[/quote]

The content director (Andrew Benedict-Nelson) of The Insight Labs has written series about the Bally wall. He did an interview with me that ended up being 1.5 hours long. Out of that came this three part series that starts off with a general look at the wall (part 1), and then dives into details about how it was made and what is next (part 2 + 3).

Part 2:
From Edison to Xbox

Part 3:
The Wave of the Future

Featured on TNW (The Next Web): Gesture-based video technology arrives at your local gym